You don’t need a traditional masonry fireplace to get a visit from Santa Claus!

Here’s the low down on how he visits homes with modern fireplaces….

We first learned of the concept of Saint Nick entering homes via chimney from an 1809 book by Washington Irving entitled A History of New York. While Santa Claus lore and traditions have remained relatively unchanged over decades, the world around him today is vastly different.

The main difference can be seen in how he is still able to enter homes with modern fireplace venting systems. Let’s take a look at the creative and magical ways that Santa Claus remains able to slip down your chimney (even when you technically don’t have one) and spread joy and cheer to the children in each household across the globe.

Fireplace On or Off?

Santa has proven throughout history to not have any trouble traveling through a fireplace, even when lit. However, since a fireplace should not be left in operation unless being monitored, and jolly old St. Nick will only appear once you are asleep, the simple answer is “fireplace off”.

While the roof is the more traditional entry point, the majority of modern fireplace terminations are now wall vented. This hasn’t proved to be a problem for Mr. Claus. He is still able to land his sleigh on the rooftop and then easily rappel down to a wall mounted fireplace termination. Local regulations have mandated a 12″ clearance from wall termination to an operable window, primarily to keep sneaky kids from spotting Santa making his entry.

B-Vented Fireplaces that pull combustion air from the outside are not only efficient for homeowners, but for Santa Claus as well. The dedicated combustion air pipe creates a cool and smooth transition from the outside of the home to the fireplace. The size of the venting doesn’t seem to be a problem either, as the red man has been able to transverse through B-Vent pipe from 18″ all the way to a slim 6″. 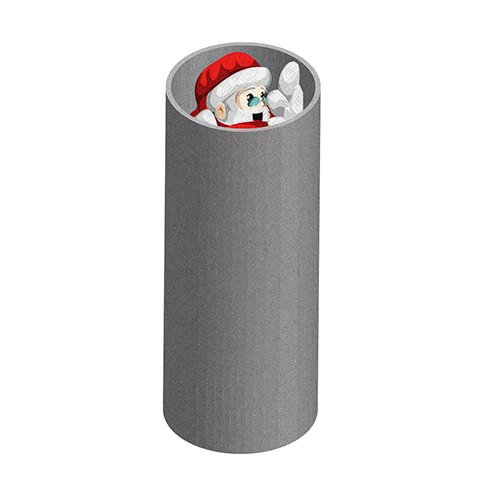 This is probably the best example of Santa’s amazing shape shifting abilities. The coaxial pipe system creates an extra tight fit for the famously rotund gentleman, but he is able to squeeze in through the outer intake air pipe and slide all the way down to the fireplace itself. The sealed combustion chamber is no match for him either. Santa can easily phase through the modern fireplace glass using his super top secret magical power known as “quantum tunneling” 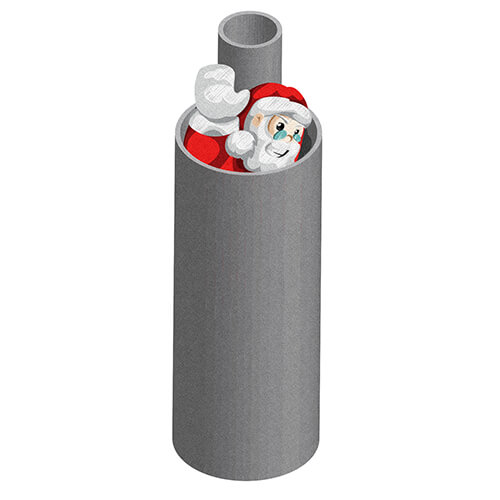 Ventless fireplaces can be difficult for Kris Kringle to tackle and we think this might be the real reason why many jurisdictions do not permit vent-free units! Luckily, he is able to conjure an entry point on the outside of the home and then travel through to the fireplace just like a home with a more traditional fireplace that has venting or a chimney. Electric and Bioethanol fireplaces also fall into this category.

We hope this has cleared up any questions or concerns on how Santa will get into your house via a modern fireplace. Rest assured that he has many tricks up his sleeve and under his hat!